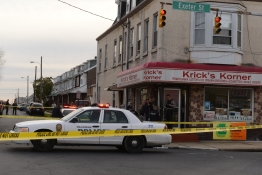 In this article by Dan Kelly of the Reading eagle, 2 robbers tried to rob a local convenience store in the city of Reading. It just goes to show that you have to take measures to defend your own personal property against potential threats.

It began as the robbery of a city convenience store, and ended when a private citizen shot and killed the two robbers Monday, authorities said. “These two men chose this store as their prize for the day, and it didn’t work out very well,” Berks County District Attorney John T. Adams said at a press conference Monday night.

Adams said he doesn’t expect criminal charges to be filed against the man who shot the two robbers. Adams said the man, whom he described as a “concerned citizen,” had a weapons permit and was within his legal rights to shoot the robbers.

The man, whose identity has yet to be released, was leaving a nearby apartment building around 2 p.m. Monday when he saw the clerk at Krick’s Korner at Ninth and Exeter streets being robbed at gunpoint by two masked men, Adams said. The man decided to wait outside the store until the robbers exited through the front door, and then shot both men once each in the chest area after being threatened by them, Adams said.

“I think that this is an incident where the concerned citizen acted justifiably under the law,” Adams said. Adams said the man is a Berks County resident who works in the neighborhood, and is also a friend of the store owner. “He came outside and heard the clerk and knew something was wrong,” said Reading police Sgt. John M. Solecki. Police have not yet identified the two robbers.

One, wearing black sweat pants, a red sweat suit-type jacket and a tan mask, fell dead in a crosswalk just outside the front door of the store. The second, dressed in all black and still wearing a mask, ran about 20 feet south on Moss Street before collapsing in the street.

According to police, the robbers entered Krick’s Korner, pointed guns at the store owner and demanded cash. The robbers walked into the store with their handguns drawn, Adams said, and then proceeded to terrorize the store owner before stealing money, cigarettes and lottery tickets.

Krick’s Korner has been robbed at least twice over the past several years, police said. Monday’s robbery was captured on surveillance video. Adams added that the police department is investigating the robbers’ possible involvement in prior robberies. Reading police said they’re also hoping to identity a third person who drove the robbers to the store.

Carmella Chipperfield, who lives nearby, said robberies are common at the store and she sympathizes with the store’s owner. “That poor man,” she said, referring to the owner. “He’s very nice and he gets robbed a lot. He’s just trying to make a living and this happens.” Chipperfield said her son was visiting her and ran outside when he heard what he thought were shots, and then heard sirens.

“He told me someone was walking into the store and he shot those two men who were robbing the place,” Chipperfield said.
Carl Gottshall of Mount Penn said he was making a delivery on Kutztown Road about a half-block from the corner when he and his co-workers heard several shots ring out.

“We ran down and saw the guys laying in the street,” Gottshall said. “Then all the cops and ambulances started arriving.” The first officers on the scene called the coroner’s office after paramedics determined the two men were dead. Adams said the man who shot the robbers is concerned for his safety and has been offered protection and relocation services by the Reading Police Department. “He was put in a situation that none of us want to be put in,” Adams said.

For more ways to be able to protect yourself and your family members, please contact us at Tony@defendyourown.com or call 610 898 3518.